It has been some time since my last blog… I’m sorry about the gap! I had a bit of time off over New Year – which seems like a super long time ago now – and since the lockdown I have been part time furloughed (and spending more time exploring more locally to me in Salisbury), so I’m at Blashford three days a week at present.

So, after Christmas I had a break from weaving willow wreaths – our final wreath total was a whopping 94 (out of 100) sold for a donation, which was a fantastic response to the activity and we hope those who bought them enjoyed decorating them. I think we may have to offer it again next year…

This was briefly replaced with a ‘Forest Folk’ activity for our younger visitors, where they could make their own forest friend or stickman then enjoy some simple activities along the wild walk loop. Although short lived, due to the lockdown, a number of families took part and we will be able to put the activity and signs out again when restrictions are lifted. 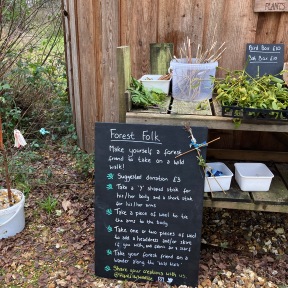 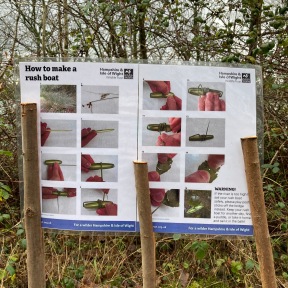 How to make a rush boat

Rush boat on the Dockens Water

I’ve also been out and about helping Bob more, mainly to provide first aid cover whilst he’s chainsawing, and it’s been nice to spend time on other bits of the reserve. We’ve spent a bit of time widening the footpath up by the screens on the approach to Lapwing Hide:

Footpath widening by the screens on the approach to Lapwing Hide 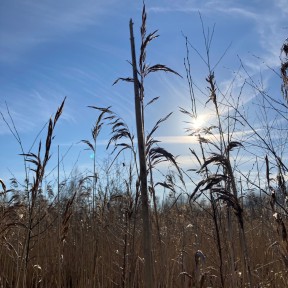 Whilst out and about it’s easy to get distracted by the signs of spring – it’s nice to know it’s on its way! I’ve seen my first scarlet elf cups and primroses are also in flower. The snowdrops near the Centre have emerged and the buds are very close now to opening fully. 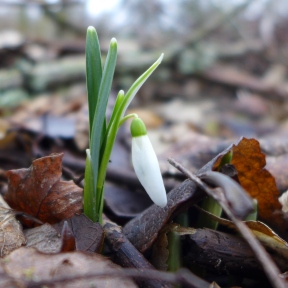 One of the first snowdrops to emerge 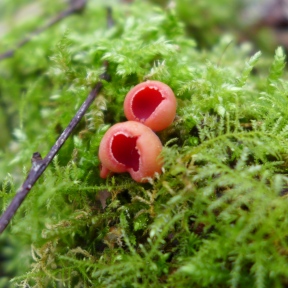 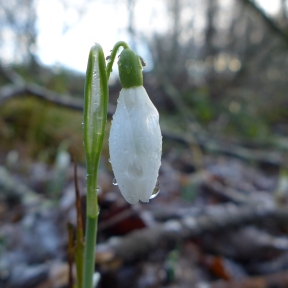 Snowdrop on Sunday covered in droplets from the melting snow

… and a very nice blob of Yellow brain or witches’ butter: 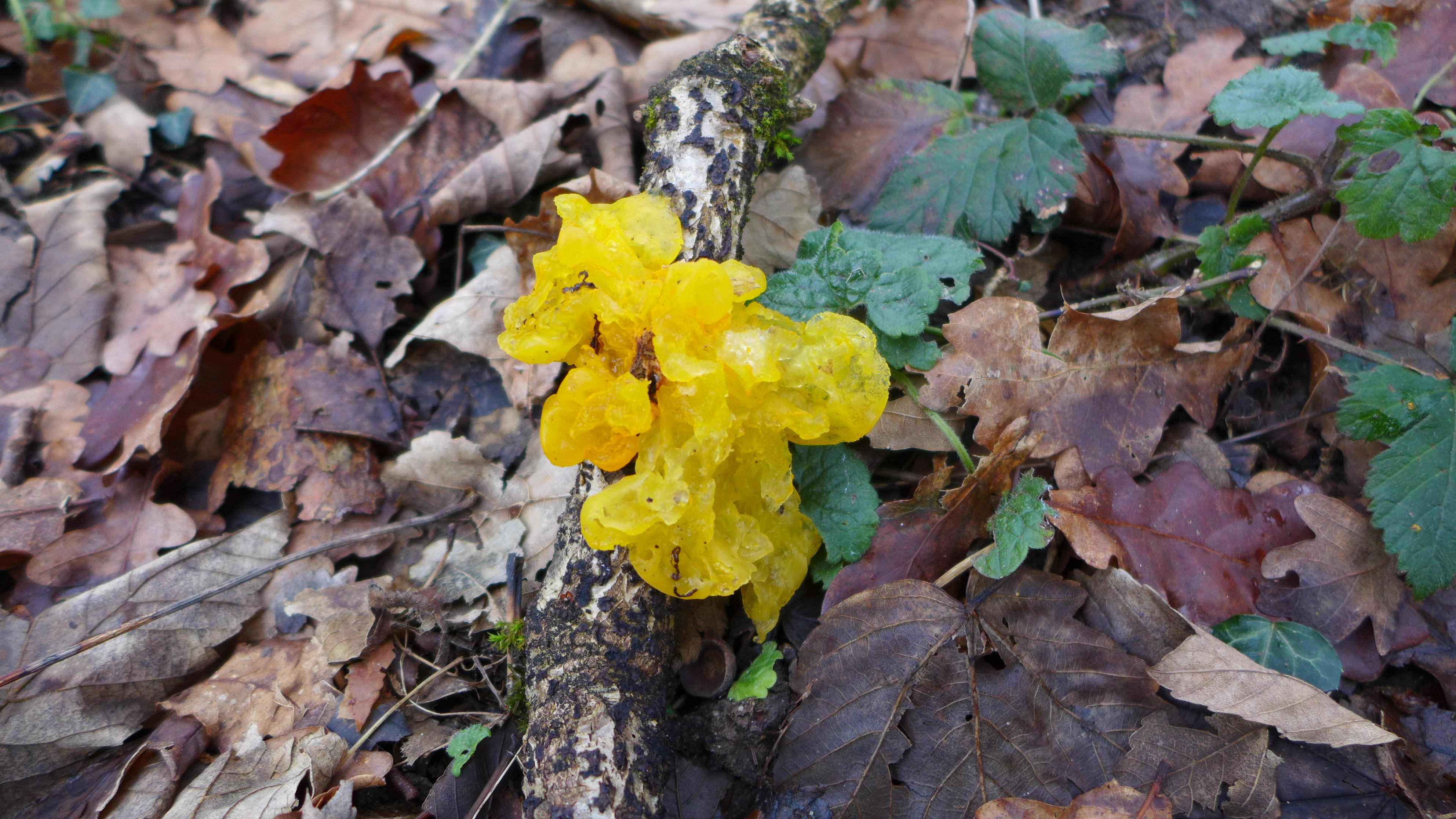 According to European folklore, if yellow brain fungus appeared on the gate or door of a house it meant a witch had cast a spell on the family living there. The only way to remove the spell was to pierce the fungus several times with straight pins until it went away, which gave it the common name ‘witches’ butter’. In Sweden, it was burnt to protect against evil spirits.

Another sign of spring I like to look for each year is on the hazel trees. If you look really closely at the hazel you might be able to spot some of its incredibly tiny pink flowers, which look a bit like sea anemones. Hazel is monoecious, with both the male and female flowers found on the same tree. The yellow male catkins appear first before the leaves and hang in clusters, whilst the female flowers are tiny, bud-like and with red styles.

Once pollinated by pollen from other hazel trees, the female flowers develop into oval fruits which then mature into hazelnuts. 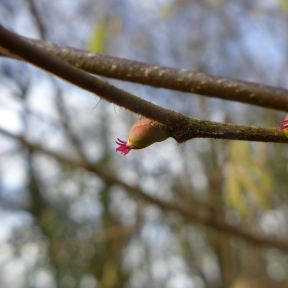 On the insect front, the only moth I’ve seen recently was this mottled umber, which greeted me on the Centre door as I was opening up one morning:

The robins near Ivy Silt Pond continue to be very obliging, posing for photos, and I’ve also been watching the kingfisher by the pond outside the back of the Centre. It seems to prefer this spot when the lake levels are higher and visibility poorer, making it harder to fish for food. 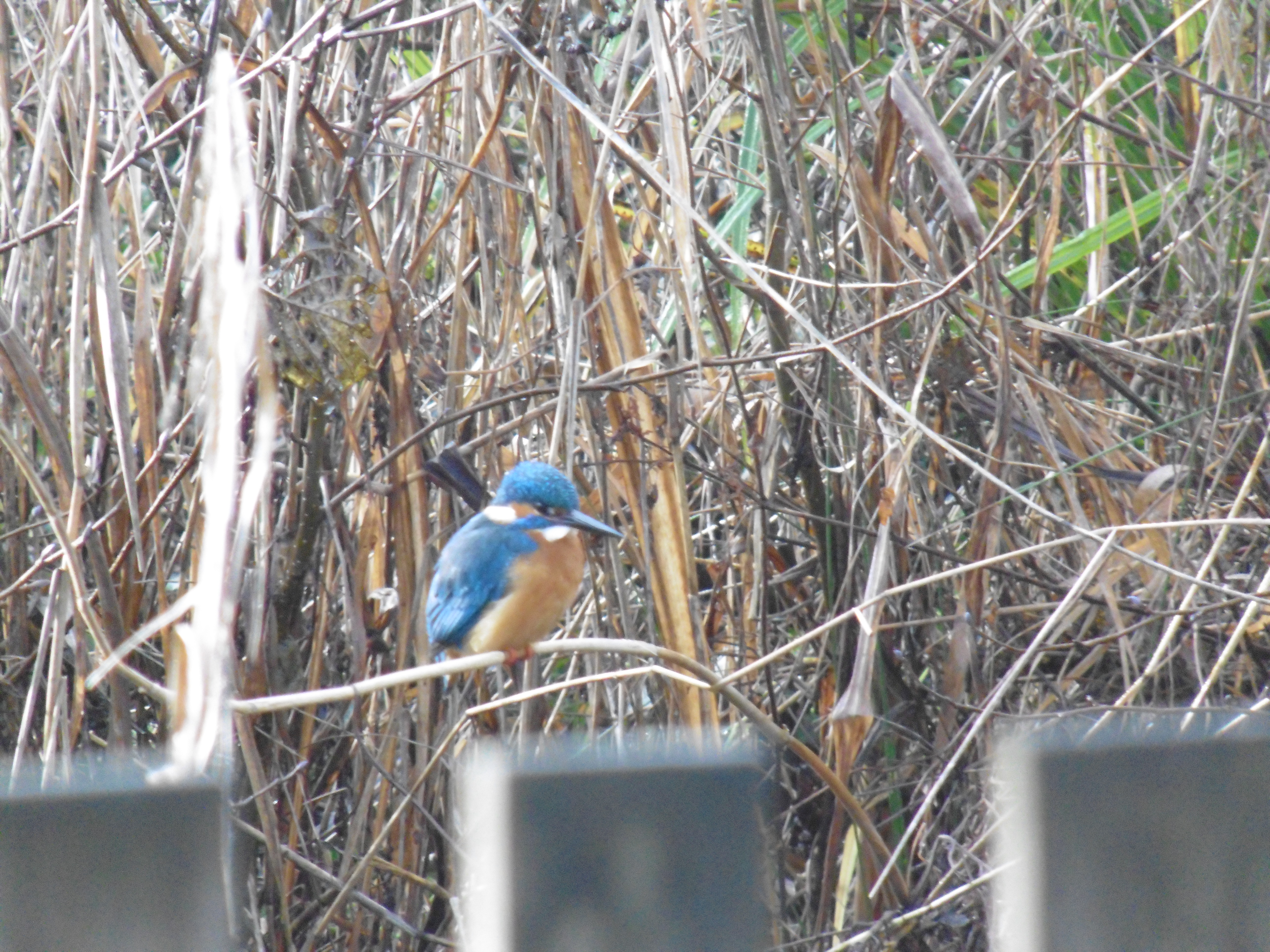 And we have on occasion had some rain! These photos were from the heavy downpours last week: 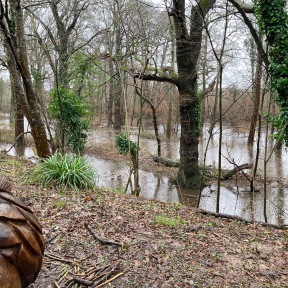 River from the acorn sculpture 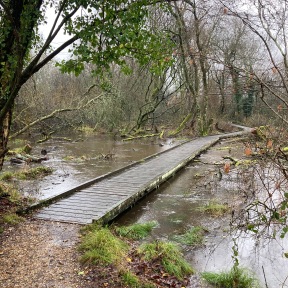 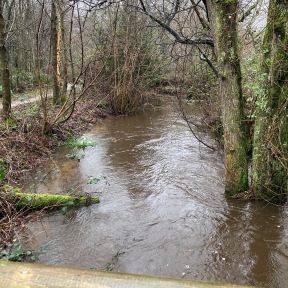 Our river dipping spot under water

On Sunday I was half expecting to arrive to a snowy scene, but it seemed to just miss the reserve. On my drive in it became less and less wintery and I arrived to a thin layer of melting slush, having left behind a rather white Salisbury. Given I had to get home again it was probably a good thing, but I admit I was slightly disappointed! It was though a good day for photographing water droplets, as everything was melting and there were plenty around! 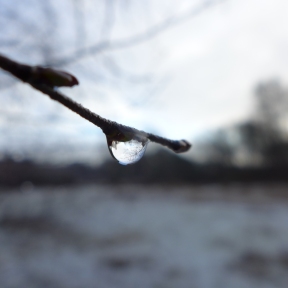 Droplet on a bud

I will finish with a blue tit enjoying the sunshine up by Lapwing Hide, and will endeavour to blog again soon… I’m woefully behind with my Young Naturalists updates…

On Tuesday I accompanied Bob to the north eastern shore of Ibsley Water so he could fell some of the willows into the lake, creating perches over the water for birds like heron and egret to fish from. I did fell a few smaller trees, but admit I was mainly there as first aid cover and did make the most of the opportunity of being in a different spot, enjoying a wander along the edge of the bay where I’ve only been once before. 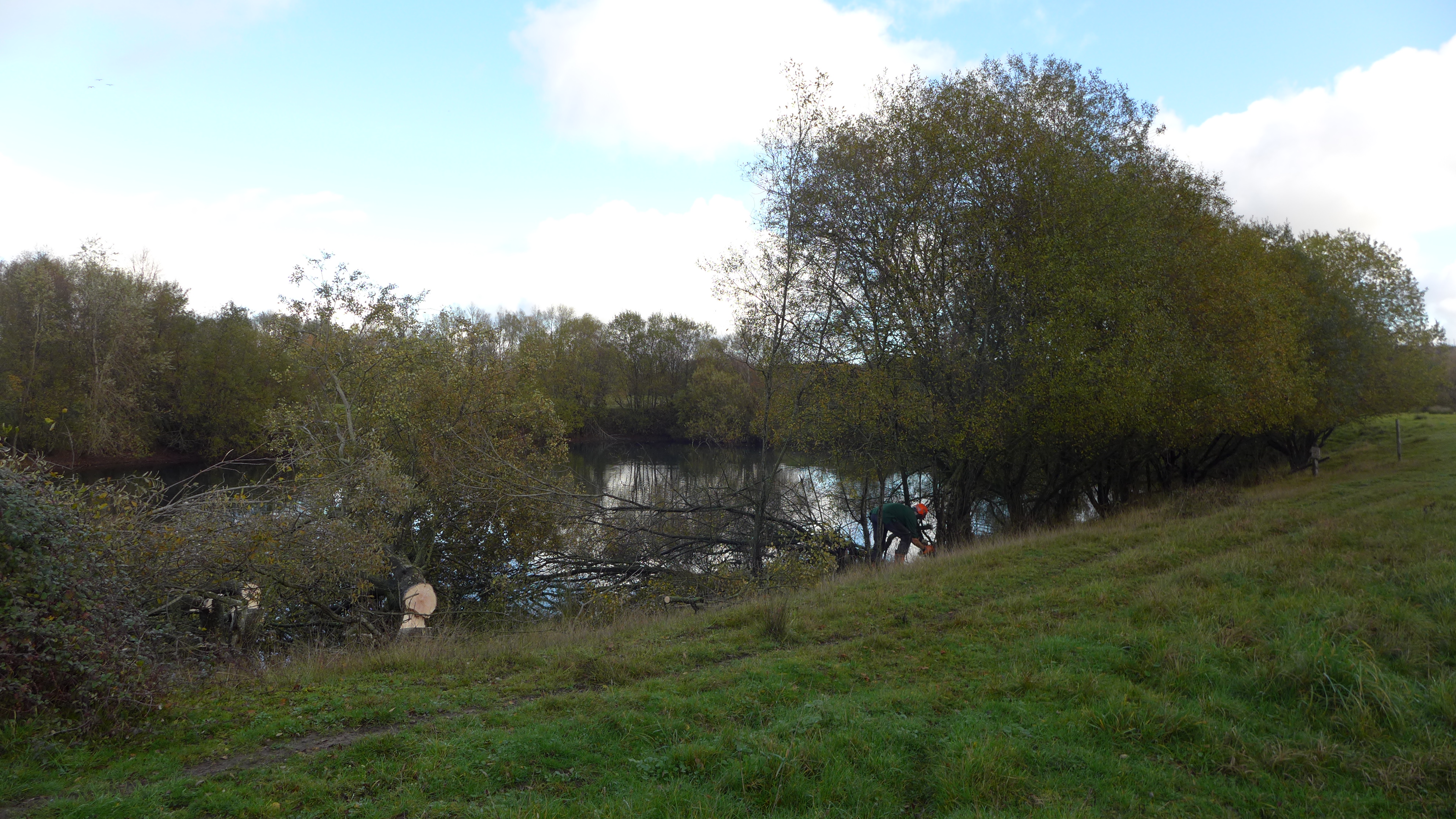 Bob felling trees into the bay north of Lapwing Hide

The view across Mockbeggar Lake towards Ibsley Common

Whilst we were up there, a goosander flew overhead and a couple of pied wagtails made themselves comfortable on the osprey perch:

On the walk back I noticed some blackening waxcaps on the edge of the lake near Lapwing Hide, which were beginning to change colour. A grassland fungi, blackening waxcaps turn black with age, hence the name, but prior to blackening they can be red, orange or yellow in colour.

The view towards Tern Hide from in front of Lapwing Hide

There is plenty of fungi in accessible locations on the reserve, with candlesnuff fungus seemingly everywhere if you look closely enough at the woodland floor along the footpath edges:

I also found a couple of earthfans on the edge of the lichen heath. They can be found on dry sandy soil and have a rosette like fruiting body which is usually reddish brown to dark chocolate brown in colour.

There were also a number of russula growing in amongst the lichen. There are approximately 200 russula species in the UK and the generic name means red or reddish. Although many have red caps, many more are not red and those that are usually red can also occur in different colours. This species could be Russula rosea, the rosy brittlegill, but I’m not completely sure so will stick with the genus russula on this occasion!

Russula species in amongst the lichen

There was also a branch covered in jelly ear fungus along the ‘Wild Walk’ loop, close to the acorn sculpture:

Also known as wood ears or tree ears, the fruiting body is ear shaped and is usually found on dead or living elder.

With the colder, wetter weather we have begun to get a number of more unwelcome visitors in the centre, usually wood mice or yellow-necked mice. Although we enjoy catching small mammals as an education activity, they are less welcome additions to the centre loft where they have in the past chewed through the cables. So we trap them in the loft too, using the Longworth small mammal traps, and safely relocate any we do catch to the further reaches of the reserve. On Sunday morning there were two mice in the loft, so I took them up to Lapwing Hide and released them into the undergrowth. 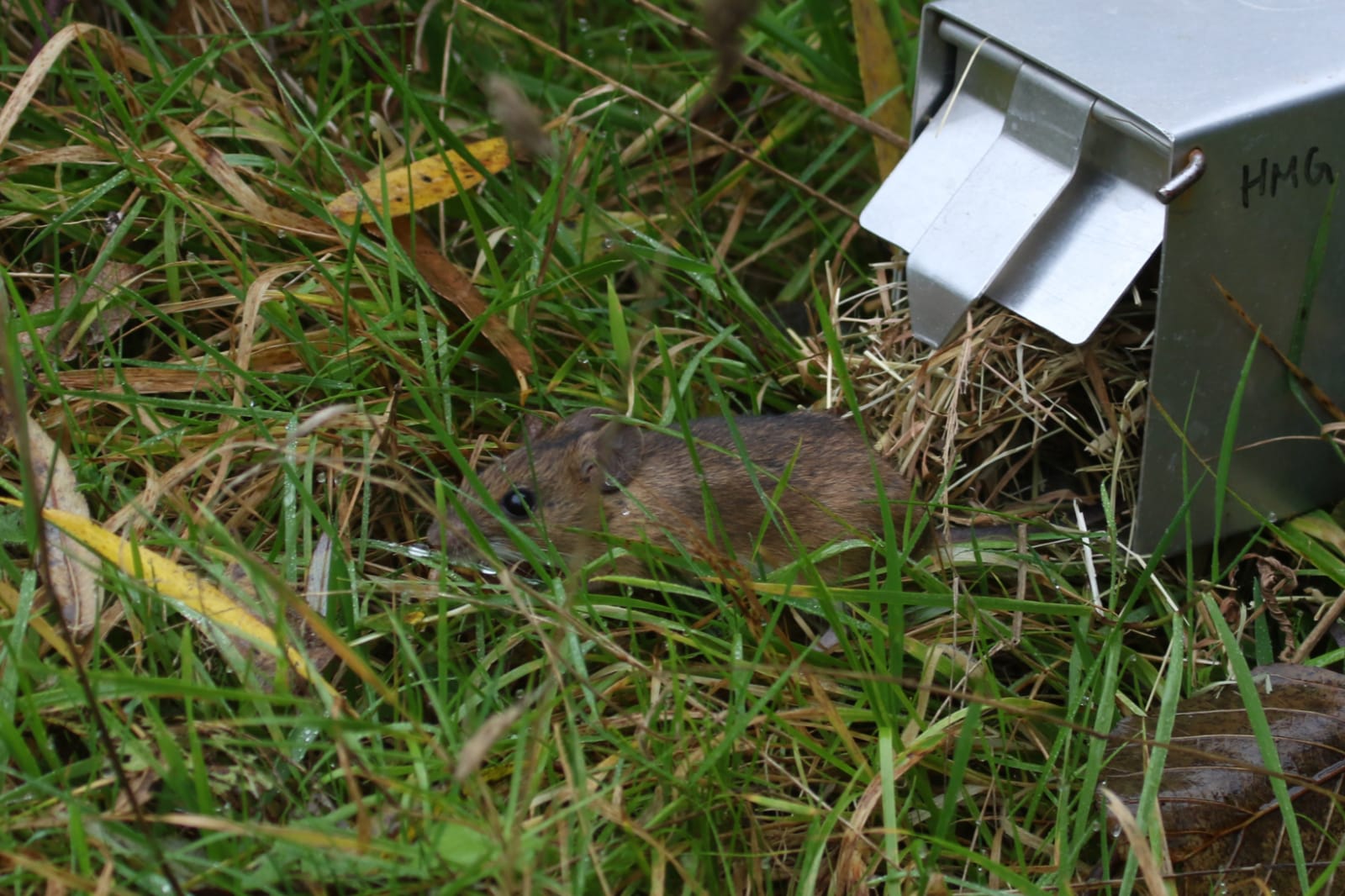 Mouse released from one of the mammal traps by Kate Syratt, who joined me for a socially distant wander to release them

There have been a good variety of moths in the light trap recently, with the highlights including mottled umber, streak, red-green carpet, green-brindled crescent, feathered thorn and December moth: 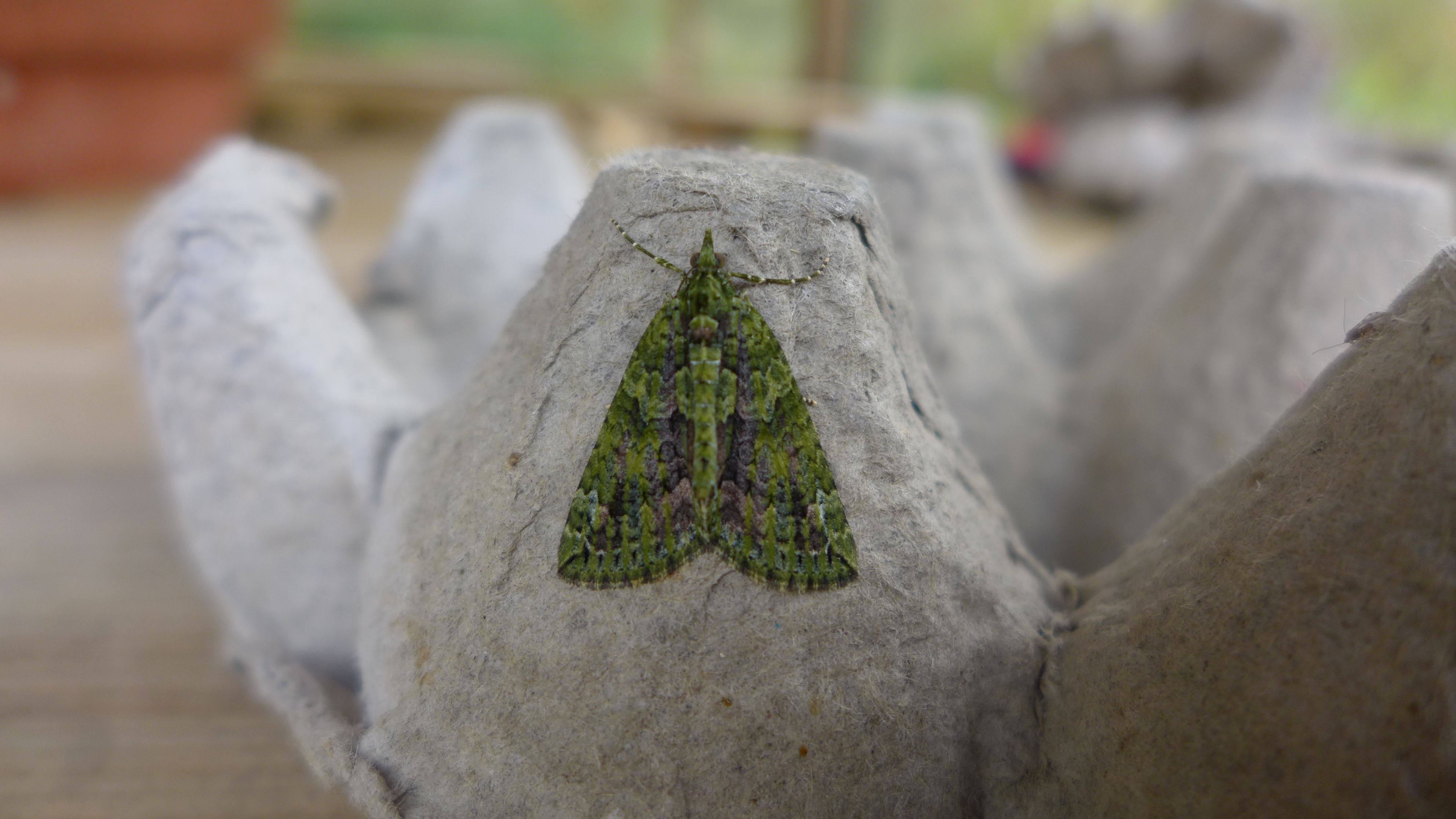 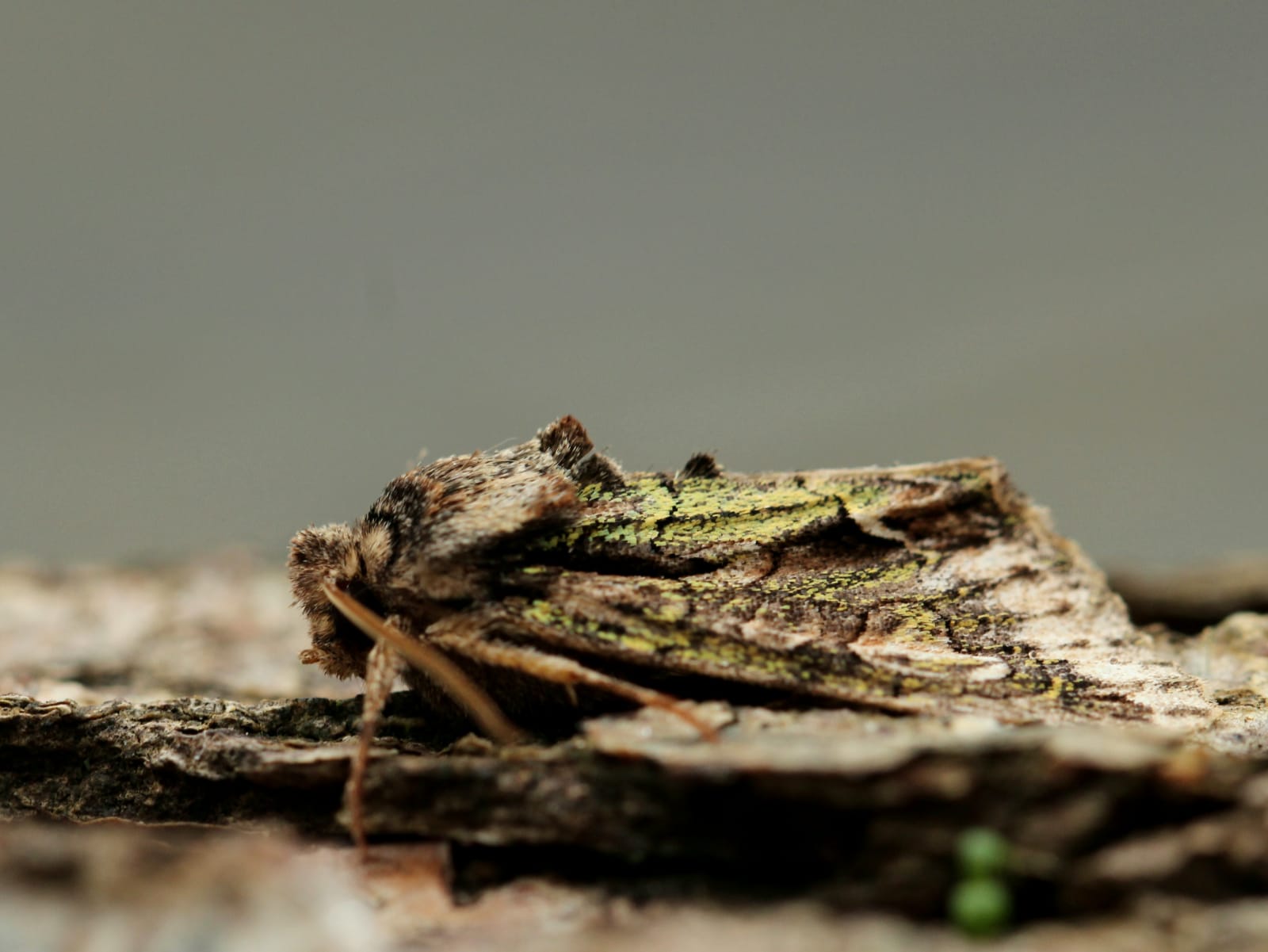 Although I haven’t seen any sign of the brambling recently, the feeder by the Welcome Hut is being regularly visited by at least one marsh tit. We had a pair around the centre regularly over the summer so it has been really nice to get great views of at least one feeding frequently.

Starling numbers have been increasing and on Tuesday evening there were several thousand north of Ibsley Water. They are best viewed on a clearer evening from the viewing platform which is accessible on foot through the closed main car park and gives panoramic views of Ibsley Water.

Ibsley Water from the viewpoint

This is the perfect spot to watch the starlings put on a show as they twist, turn, swoop and swirl across the sky in mesmerising shape-shifting clouds. These fantastic murmurations occur just before dusk as numerous small groups from the same area flock together above a communal roosting site. The valley boasts a sizeable starling murmuration most years, with the reedbeds to the north of Ibsley Water often used, along with those on the other side of the a338 to the west and the smaller reedbed by Lapwing Hide in the east, so from this higher vantage point all possible roost sites can be seen.

Although I don’t have any photos to share of the murmuration, taking a video instead the last time I watched them, it’s also a really nice spot to watch the sun set.

Please visit the Trusts website to view events coming up at Blashford Lakes & elsewhere across the two counties: https://www.hiwwt.org.uk/events